An A-class team can successfully realise a B-class idea, but a B-class team cannot get an A-class idea off the ground. According to studies conducted by FiBAN, business plans have to be changed more than six times after a financing decision before the right model is found. If the company does not have a good team carrying out the new plans, the investor has invested in “vaporware”.

One person does not constitute a team. It is exceptional for an investor to invest in a company where there is only one person. Entrepreneurs must therefore surround themselves with people who are smarter than them. When several people own a company, they need to realise that equal distribution is not a tactic, but rather indicates that the company has failed to discuss the mutual roles of the owners. It also is important to understand that the inception of a limited company is the only time that the ownership of the company can be divided between the owners in a totally arbitrary and preferred ratio without any third party taking interest in the matter. For this reason, a business angel is occasionally sought even before a company actually exists.

“There is no question that irrespective of the horse (product), horse race (market), or odds (financial criteria), it is the jockey (entrepreneur) who fundamentally determines whether the venture capitalist will place a bet at all.”
– Mac Millan et al. 1985

Angels seek people equipped with high motivation, will and business know-how with the ability to make impressive pitches to investors, partners and customers. Previous failures, such as bankruptcy, do not necessarily have a negative effect; instead they may be seen as positive learning experiences.

The level of perfection of a team can be assessed on the basis of eight different areas: Will, Know-how, Courage, Relationship Network, Marketing Spirit, “Coachability”/Learning Ability, Reliability and Heterogeneity/Complementarity.

Willindicates most clearly the time span of a team – how long and how intensively they have worked to take the company forward. Know-how is indicated by the team’s tangible achievements and courageis indicated by the willingness of the people involved to “throw themselves” into the company through, among other things, voluntary hours of work, monetary investments and loans. If an entrepreneur is not ready to finance/take out a loan for a company him- or herself, why would anyone else?

The extent of the relationship network reflects for its part the team’s previous work history and experience. The more extensive the network, the wider the experience accrued and range of things that have been learned.Marketing spirit is, especially nowadays, one of the key features and attributes of a team. This mainly involves the attitude and approach of entrepreneurs towards sales activities. The“coachability” or learning ability of a company team reflects the team’s potential to develop and grow with the company. A team that is unable to learn or that cannot be coached is an impediment to the realisation of an investment, as pointed out previously. 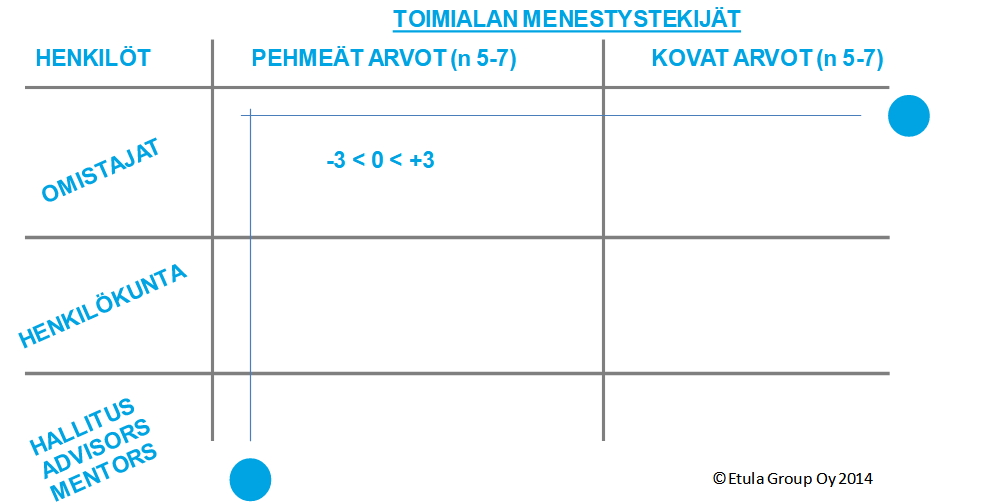 The reliability of a team is a matter of course for operations. Reliability also measures for its part loyalty to the group and to the idea – whether the interest of an individual or the company is the priority in operations. The heterogeneity and complementarity of the entrepreneurial team ensures that each shareholder has something to give and that he or she has a reason to be and a clear role in the company. Heterogeneity is at its best when all the areas are filled, but there is always a “back up” person in the team who is able to perform the duties required in another competence area at an average level, at minimum. You can analyse the heterogeneity of your own group and know-how using the tool above. Instructions on how to use the tool are available at etula.fi/successmatrix.

Exaggerating or falsifying your abilities easily leads to the curtailment of investment discussions at the DD stage. A company’s own awareness of insufficient know-how and its recruiting needs gives the investor a positive image that the company is sufficiently mature to implement the business idea. A person needed to fill a specific key position may be found through an angel’s networks and this may positively influence the investment decision – trust between the individuals already exists.

One task to be addressed in the early stage of a company is the setting up of an advisory board or a board of directors. Some of the best advisers are individuals who have a restless and sceptical mind, the courage to express themselves, a forward-looking perspective, the ability to question and inspire and the willingness to commit (Dayton 1984). Before accepting a person on a company’s advisory board, you must make absolutely sure that he or she has agreed and is committed to working on the board.

This Sliding Bar can be switched on or off in theme options, and can take any widget you throw at it or even fill it with your custom HTML Code. Its perfect for grabbing the attention of your viewers. Choose between 1, 2, 3 or 4 columns, set the background color, widget divider color, activate transparency, a top border or fully disable it on desktop and mobile.

Sign-up to get the latest news and update information. Don't worry, we won't send spam!