Angels always invest their own money and are minority shareholders

Business angel investing refers to the investment made by a private individual in an unlisted potential growth company to which he or she does not have any family ties. As there is no scientific definition as to who is considered a business angel, Lahti (2008) defines in his doctoral study a business angel by means of three characteristics:

A typical business angel is a 35-to-65-year-old person. He or she has served either in management positions in a large company or as an entrepreneur for a significant part of his or her career. He or she is able to devote at least one day a week to angel activities. A key characteristic of angels is that they feel that they have something still to offer – to startup companies.

Pre-seed is the stage at which there may be a team and an idea, but not necessarily even a company. Investment enables the first stages of product and idea development. Increasingly, incubators are taking over this investment phase that allows the business angel to focus on the other stages below.

In the seed stage, the team has acquired the tools and produced their first version of the product/service in their garage. The investment is used in verifying and starting up product development or a business model. 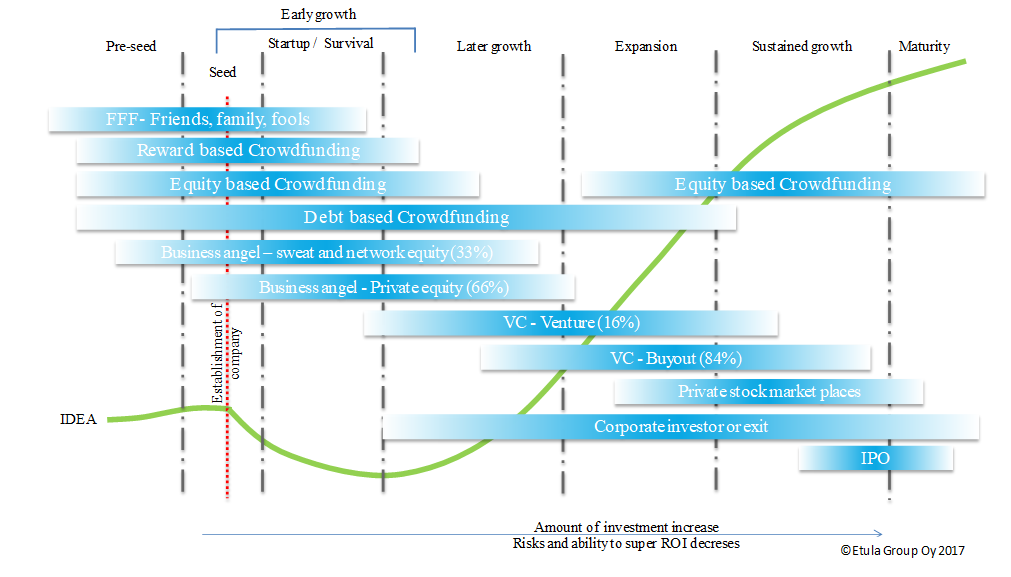 Start-up/survival is the stage where the existing team has grown, moved out of the garage into its own premises and launched the first version of the product. Turnover is generated but it is not yet sufficient to cover expenses. An angel investment is usually used for product and market development or working capital, in other words, to get over the “valley of death”.

In the later growth stage, business expands from the company’s home town to the international market and trade booms. Incoming cash flow exceeds outgoing payments and the business begins to accumulate cash. The investment is used to accelerate growth. Here again and thanks to smart phones and broadband network proliferation, many companies are “Born Global” from day one.

In the expansion stage, the company already has considerable turnover and aims to expand to ever-new markets, product groups or industries.

Although different types of investors invest in companies at different stages of their lifecycle they do, however, have some features in common. The most important shared feature is willingness to make syndicated investments. Syndication refers to co-investment by several investors where the group is represented by one person. Syndicated investments enable better management of risks and a more diversified portfolio with same investment amount in euros. Syndicates are also an excellent way of acquiring larger investments. Business angels and private equity investors typically also make cross-syndication investments.

The number of business angels throughout Europe is estimated to be approximately 303,650. According to the most recent studies (EBAN), approximately 8.6 billion euros were invested in early stage companies throughout Europe in 2015. Of this sum, 6.1 billion came from business angels, 2.1 billion from the early stage VCs and 0.4 billion euros through crowdfunding.

This Sliding Bar can be switched on or off in theme options, and can take any widget you throw at it or even fill it with your custom HTML Code. Its perfect for grabbing the attention of your viewers. Choose between 1, 2, 3 or 4 columns, set the background color, widget divider color, activate transparency, a top border or fully disable it on desktop and mobile.

Sign-up to get the latest news and update information. Don't worry, we won't send spam!